The Speed of Dreams

Should Small to Medium-Sized Businesses Use Inbound Marketing? New Data Reveals the Answer.

Small and medium-sized businesses (SMBs) typically do not have large marketing budgets. Consequently, they have to make very wise choices about how to allocate precious funds. One of the things they must decide is whether to focus on outbound marketing (pushing their message to customers via advertising, email blasts to purchased lists, etc.) or inbound marketing (publishing quality, relevant, valued content to entice prospects to engage with your marketing information, i.e. content marketing).

A new report from HubSpot titled “State of Inbound 2015” makes a compelling case for the idea that SMBs should definitely be executing a great deal of inbound marketing, and perhaps very little outbound.

While you don’t want your company’s marketing strategy to be be based on simply “keeping up with the Joneses,” it stands to reason that an approach researched and selected by a large number of companies is likely to have value for your company as well. HubSpot’s research found that:

Why is this the case? Primarily because inbound marketing is both very effective and very cost-effective, so it helps SMBs level the playing field with their larger competitors. 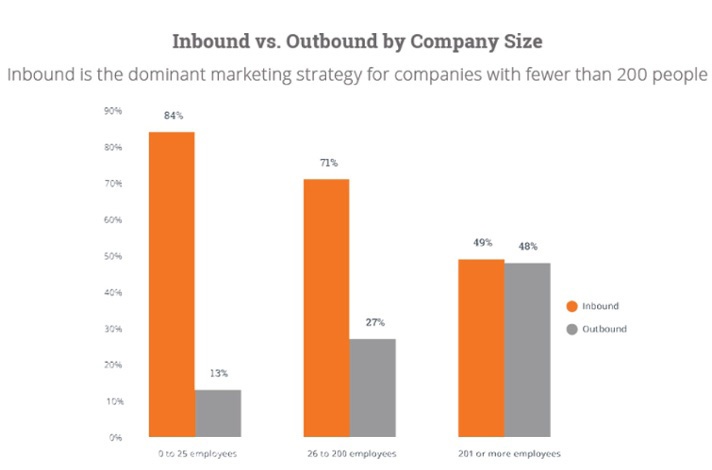 Another key benefit of inbound marketing for SMBs, and a great reason to use it, is the fact that with a marketing automation system in place, it is very easy to track engagement with your content. This helps companies with one of the bigger challenges they revealed in the State of Inbound survey: proving the return on investment (ROI) of their marketing programs.

According to the study, providing this proof is critical to the funding of a marketing program’s initiatives:

And when looking at ROI on inbound versus outbound, the survey revealed that participants—regardless of marketing spend—were three times as likely to see a higher ROI on inbound marketing.

The Broad Appeal of Inbound

In the early days of inbound marketing, some critics claimed that the practice would only be effective in certain niche markets. Experience now tells us—and the State of Inbound report confirms—that those early predictions were dead wrong. Inbound has proven to be effective across the B2B, B2C, and nonprofit sectors.

What’s more, inbound marketing’s appeal is growing within companies. In fact, the survey revealed that senior executives now favor the practice even more than managers. This is great news for marketers, who indicated that finding an executive “sponsor” for their inbound activities is a primary concern, and is seven times more likely to be mentioned in 2015 than 2014.

Looking at inbound adoption from a budget perspective, the study found that:

The Dollars and Sense of Inbound

To sum it up, State of Inbound 2015 makes it crystal clear that inbound marketing is productive, cost-effective, and more accepted than ever before. If you have been trusting your gut or looking to the advice of your peers as you consider an inbound/content marketing strategy, you would be wise to take a look at the numbers as well. When you reflect on the stats from the past year, you’ll see that inbound should definitely be in your future.